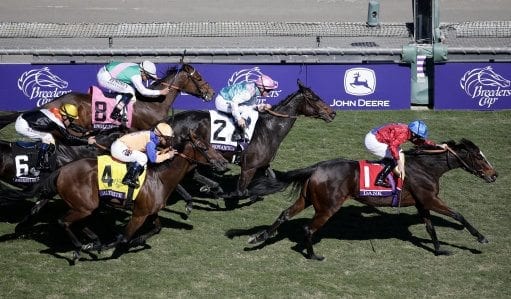 Although meetings at Aqueduct and Laurel Park were abandoned ahead of Saturday’s racing, there is still 76 races to come from eight cards this evening.

Mahoning Valley’s eight-race meeting is the first to get underway at 17:15, with a claiming contest starting proceedings in Ohio.

Punters can look forward to two Grade 2 and two Grade 3 races on Saturday, while a maiden special weight brings the card to a close.

Gulfstream Park’s card features 12 races on Saturday, with punters able to watch all the action between 17:35 and 23:12.

Betfred have punters covered throughout the meeting, with their “Extra Place” promotion available in seven of the races.

Fish Mooney (SP) won for the second time in her career in January at Gulfstream Park, and connections will hope she can land the spoils again in the finale at 23:12.

California residents will be in attendance at Santa Anita, with nine races planned from 20:31.

There are up to three places available in an allowance optional claiming race at 22:34, and Gregdar (SP) could run a big race after a decent performance at Santa Anita last time out.

Golden Gate Fields’ card runs from 20:45 until 00:56, with nine races on the agenda, while both cards at Charles Town and Remington Park get underway at 00:00.

There are eight races at Charles Town planned until 03:32, while Remington Park’s final contest should start at 03:36.

Last but not least, we have nine races scheduled at Sam Houston Race Park, with the card due to run from 00:45 until 04:52.