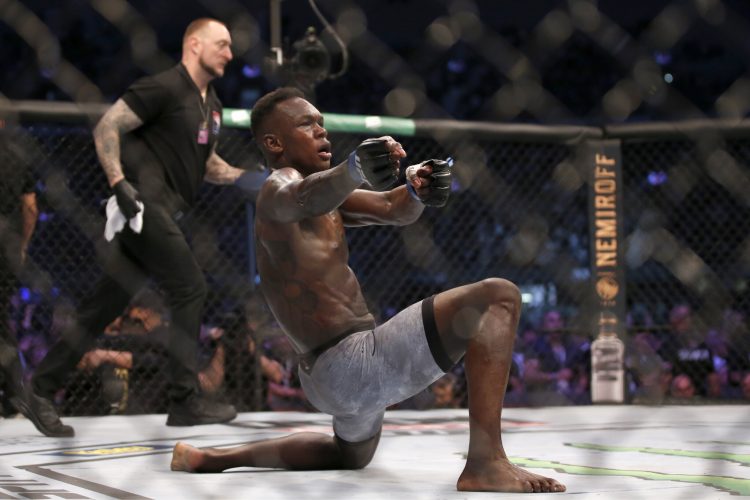 There’s another big-time instalment of MMA this weekend as UFC 271 comes to us from the Toyota Center in Houston, where we have a rematch for the Middleweight title and a couple of potential number one contender deciding fights.

This highly intriguing, 15-fight offering is headlined by Israel Adesanya (pictured above), as he stands across the octagon from an old foe in the much-improved Robert Whittaker.

Let’s get straight into the main card …..

It’s the battle of two New Zealand-born middleweights in the main event, as Robert Whittaker looks to avenge his 2019 UFC Middleweight title-fight reverse to ‘Izzy’. Adesanya has defended his crown three times since then, the last occasion being against Marvin Vettori in June 2021.

Sandwiched between those defences was the New Zealander’s attempt to become ‘Champ Champ’ as he moved up a division, but he came up short against then-Light Heavyweight champion Jan Błachowicz.

And while Adesanya has made known his desire to have another crack at the 205 division, he’ll need no help in focussing for this one back at 185.

That’s because he comes into this one against a different Robert Whittaker than the one he met back in 2019. Sure, the old positives are still there, but Whittaker has been utilising his wrestling far more in his three fights since the original bout, something his opponent will have to be prepared for.

The last time these two fought, Adesanya finished his fellow Oceania native in two rounds, and while that may not happen this time, you’d still have to fancy the reigning champion. Izzy on points (method of victory – 13/8) could be the bet here.

This clash between Derrick Lewis and Aussie Tai Tuivasa should go someway to determining something like a number one contender for a division currently up in the air, with champion Francis Ngannou widely known to want to leave the company.

Lewis is in his hometown of Houston here, so the sometimes relaxed and jovial heavyweight should be well up for this one. Any fight involving Tuivasa is always liable to be fireworks, but if he decides to go all in and throw with Lewis, he could be in for a bad night.

That’s reflected in the odds as a Lewis KO/TKO is just 4/5. If you’re feeling like this one might be over quickly we’re offering 11/2 for the fight to be over in 59 seconds, either way.

Before the main event gets underway at the end of the night, we may very well know who the next opponent for the belt could be, as Jared Connonier takes on Derek Brunson. Both are veterans of the octagon, with each man having at least twelve UFC fights to their name.

Brunson has been on a mini-career resurgence of late, having won five on the trot, notably last time out against Britain’s Darren Till, where he used his wrestling to great effect.

Connonier is the favourite here, but earlier on in his career there were signs he could struggle against the very top wrestlers, so underdog Brunson could very well be worth a punt here for a decision victory (5/2).

Kyler Phillips comes into this one off the back of a defeat against Raulian Paiva in July of last year. The 26-year-old was maybe pushed a little too far, too soon, and this bout with the more experienced Marcelo Rojo is a great chance for him to get back to winning ways.

For Rojo, it may be something of a judgement day, with a loss here perhaps meaning his UFC career could be cut short before it gets started, especially given the bantamweight division is stacked.

Bobby Green picked up some momentum back in 2020 with three straight wins, which seemed like a career resurgence for the 35-year-old, but he was brought back down to earth with two straight losses to Thiago Moises and Rafael Fiziez not long after.

Nasrat Haqparast is in a somewhat similar situation, although much younger, having won two on the bounce before a step up in class saw him lose a decision to Dan Hooker in September of 2021.

Green certainly has the edge in terms of experience, with Haqparast edging Green out in terms of knockout power, but Green hasn’t been knocked out in a fight since 2016, and that was to Dustin Poirier.

Green also has wrestling to fall back on, which is perhaps a hole in the German’s game. A decision victory for Green (15/8) could be the bet here.

Check out all of these bouts as well as the undercard odds HERE; with Betfred