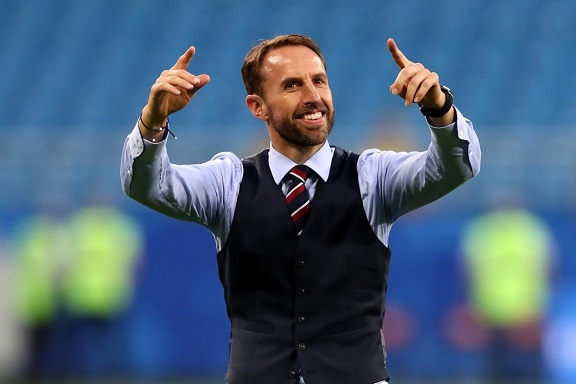 Gareth Southgate (pictured) hasn’t been afraid to switch things up within the England set-up since he took charge in 2016 and the results are clear to see – reaching the semi-finals at the 2018 World Cup and making it to the final at Euro 2020.

He has used 97 different players over the past six years and, having confirmed he will be handed out more debuts during the current international break, that figure is set to reach 100.

Palace pair Mitchell and Guehi and Southampton full-back Walker-Peters are the new faces in the camp this week as England prepare for friendlies against Switzerland and Ivory Coast.

Switzerland are the visitors to Wembley on Saturday at 17:30 and Southgate has confirmed those three players will get on the pitch at some point over the next few days.

Southgate said: “We will have debuts this week for sure. Great moments for those players and we will always want to put them in with experienced players.

“Training has been good. The players have enjoyed being back together with their England team-mates.

“It has given them a psychological refresh before they go back into another important period with their clubs and we are enjoying working with them again.”

With just eight games to play until the 2022 World Cup in Qatar, Southgate has stressed the importance of getting into “tournament mode” as he looks to establish his best squad.

Boss Stephen Kenny has already confirmed that Liverpool’s Caoimhin Kelleher will start in the absence of Gavin Bazunu.

“He’ll most likely play the two matches now, I think it’s fair to say, and deservedly so.”

Kelleher played a key role in Liverpool’s Carabao Cup victory but has only made three previous appearances for the national side.