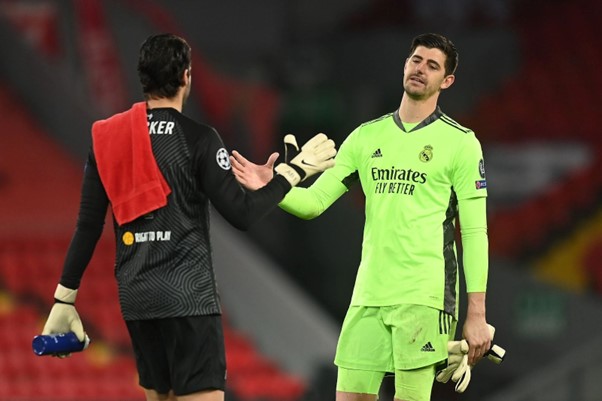 After Thibaut Courtois become only the third goalkeeper in Champions League history to be named Man of the Match in a final, he opened up about how he felt a “lack of respect” from some quarters.

His comments got us thinking. Who is the best goalkeeper playing at the elite level right now?

The current landscape is fascinating. Some of the established names have had quieter seasons, whilst some younger ‘keepers have taken major strides.

Here is our list of the best goalkeepers right now, in our view, across Europe’s top five leagues ….

We couldn’t look past the Liverpool ‘keeper for our top spot. His unique tactical profile is a huge contributing factor as to why LFC are able to dominate territory like they do. The Brazilian international kept a clean sheet in 20 of his 36 Premier League appearances last season.

The biggest of performances on the biggest of stages has clearly boosted Thibaut Courtois’ reputation. The former Chelsea stopper saved 9/9 shots in the Champions League final, the vast majority of which were from inside the box. He has been more than steady in La Liga, too.

The data suggests that Bochum would have conceded 10 more goals in the league last season if they replaced their veteran stopper with a league-average equivelent … 10!

As well as being an excellent shot-stopper, Riemann took command of his box and distributed the ball consistently well, as his side upset the odds to comfortably survive relegation.

Wolves scored the fewest amount of goals of any side to survive in the Premier League last season. However, Bruno Lage’s side had a comfortable-at-worst campaign thanks largely to the brilliance of Jose Sa between the sticks.

We’ve seen goalkeepers struggle to adjust to the English top-flight plenty of times, but Sa looks entirely at home at the top level.

The Bayern stalwart remains one of the world’s most complete ‘keepers. He didn’t have his strongest shot-stopping campaign last term but played a key role as Julian Nagelsmann settled nicely in Bavaria.

With many of the German champions’ newer additions making slow starts, it was key that the established players held things together and Manu’ certainly did that

An excellent passer who is comfortable at taking crosses and has the vision to quickly set-up attacks: Robert Sanchez is an archetypal modern GK. You’d hope his actual goal prevention would take an upturn before long, but there’s so much of his game that is already at an elite level despite his young age.

Man City’s number one had a relatively unremarkable season but maintains his place in the top ten. He was about par when it comes to the goals you’d expect him to concede and the ones he did, but we can’t ignore the fact that he continues to play a key role in-possession for the best ball-playing side in Europe.

The young Frenchman played every minute as Nantes made an unlikely leap into Ligue 1’s top ten. He’s another one with a broad skillset who looks set to establish himself as one of the world’s very best as soon as he matures physically and technically. For now, he has to settle for a place in our top ten.

Rounding off our list is another goalkeeper who stood out in a European final last season. In fact, across the Europa Conference League campaign – which defined Roma’s season, Patricio kept 6 clean sheets.