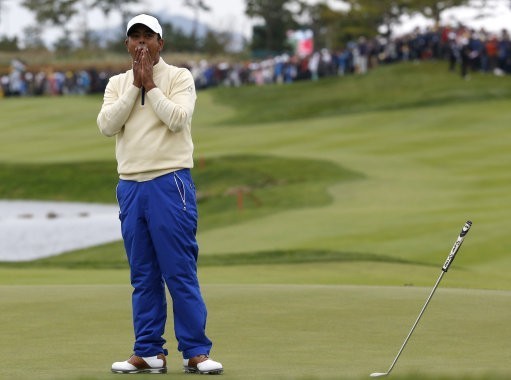 After storms disrupted play on the first three days of the event at TPC Sawgrass, the competition is set to conclude on Monday.

Play will resume at 12:00 GMT with all remaining 71 players still to complete their third rounds in Florida.

Lahiri is the man to catch after finishing Sunday on nine-under and one-shot clear of Tom Hoge (8/1 – Players Championship outright) and Harold Varner III (11/1).

The Indian world number 322 climbed to the summit after picking up five birdies in the opening nine holes of his third round and he’s due to complete the final nine on Monday.

He is yet to earn a top-25 finish in 12 starts this season but he’s well in the mix to scoop the ‘Unofficial Fifth Major’.

Lahiri said: “It will definitely be a career highlight. That goes without saying.

“This is the next thing to winning a major I would say. Who doesn’t want to win The Players Championship?”

Meanwhile, Paul Casey (9/1 – Players Championship outright) put himself firmly in the mix following a bogey-free Sunday as he attempts to become the first Englishman to win the Players.

Casey is just two behind leader Lahiri after going through 42 holes without dropping a shot.

Ireland’s Shane Lowry (20/1 – Players Championship outright) is four shy of the summit but he lit up the third round courtesy of a stunning hole-in-one on the Stadium Course’s signature 17th hole.

Lowry said: “Special things happen sometimes. It’s pretty cool to do it there, one of the most iconic holes in golf. Not only that, it put me back in the tournament.”