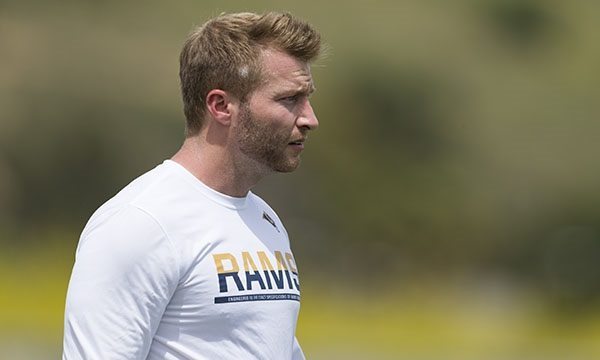 The Los Angeles Rams won their first Super Bowl crown since 1999 as they beat the Cincinnati Bengals 23-20 on Sunday night (Rams – 9/1 to win Super Bowl LVII).

The Rams were the pre-game favourites and they had the added advantage of playing Super Bowl LVI on home soil at the SoFi Stadium in Inglewood.

Sean McVay’s side got off to the perfect start as Odell Beckham Jr scored the first touchdown of the game, only to then sit out the majority of the game due to a knee injury.

The Bengals, who were looking to win their first Super Bowl – just two years after finishing as the worst team in the NFL – soon found their rhythm, and they charged into the lead thanks to QB Joe Burrow and the boot of Evan McPherson.

With six minutes remaining, the Bengals led 20-16, but their offensive line failed to keep Aaron Donald and co at bay. Numerous sacks allowed Matthew Stafford the chance to attack and the Rams QB picked out Super Bowl MVP Cooper Kupp.

Donald’s fourth-down sack on Burrow ended the Bengals’ chances at the death, and the Rams’ star-studded squad delivered the goods when it mattered most.

Speaking after the game, head coach McVay said: “It feels outstanding. I am so proud of this team. We talk all the time about competitive greatness, about being your best when your best is required, and Matt gets to finish it off – it is poetic.

“Those guys did a great job – they took over the game. World champs, baby!”

The Rams went all out to build their roster, giving up several first-round draft picks to sign Stafford from the Detroit Lions, and he rewarded the organisation with their second Vince Lombardi Trophy.

Donald hinted at retirement after the game ended, but said he will enjoy the celebrations before deciding his next move.

He told reporters: “I’m enjoying this with my family. I promised my daughter this when she was 5 years old to play in the confetti… so I’m just in the moment right now.

“I’m going to enjoy this with my team-mates, my family and I’m just going to be in the moment and enjoy this today, for a couple days, how about that? It’s a blessing.”

The Bengals will now hope to address their offensive-line issues in the off-season and they are 14/1 to win the Super Bowl in 2023.

State Farm Stadium in Arizona will host Super Bowl LVII, with the Kansas City Chiefs the ante-post favourites at 13/2.