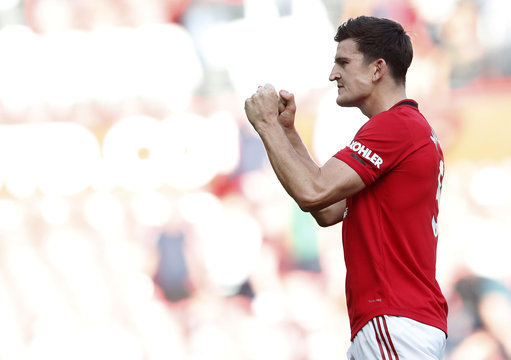 Manchester United interim manager Ralf Rangnick praised the maturity of his side’s performance as they beat Leeds 4-2 in a passionate and combative game at Elland Road.

It was the first Premier League meeting at Elland Road in front of fans for 18 years, and the atmosphere was frenzied throughout.

The visitors struck the first blow as Harry Maguire (pictured), who Rangnick says will remain captain contrary to recent rumours, headed home a Luke Shaw corner 10 minutes before the break.

Bruno Fernandes then doubled their lead on the stroke of half time with a header of his own following great work from defender Victor Lindelof on the counter.

Leeds responded by bringing Raphinha and Joe Gelhardt off the bench and pulled one back when Rodrigo’s cross wrongfooted keeper David de Gea and floated into the top corner.

Barely a minute later, Raphinha snuck in at the back post to turn in a Junior Firpo cross and Manchester United found themselves on the ropes.

However, it was a second half that belonged to the substitutes as Fred slammed them back in front before Anthony Elanga’s cool finish sealed the points.

Rangnick’s men have jumped back up to fourth and are now four points clear of West Ham.

“It took us 15 minutes to get control of the game but then we started to play well; at half time we were fully aware that we had to be on the front foot, but we conceded two goals in two minutes and that changed the whole game obviously,” said the German

“The atmosphere was amazing but we showed some maturity and kept our heads. We showed maturity and that was the only way to get control once again.”

Leeds, meanwhile, stay 15th and are five points above the drop zone.

In Sunday’s other Premier League game, Wolves moved to just six points behind the top four after defeating out-of-form Leicester at Molineux.

The hosts took the lead early as Ruben Neves curled in a beauty from outside the box.

However, a great Leicester move got the Foxes level as Youri Tielemans’ accurate through ball found Marc Albrighton, whose cross was tapped in by Ademola Lookman.

They are now up to seventh, while Brendan Rodgers’ Leicester stay 11th after failing to win any of their last five Premier League games.

The result further piles the pressure on Rodgers but the Northern Irishman insisted there were plenty of positives to take from the result.

“Sometimes after you lose there is disappointment or frustration but I am very enthused,” he said. “I have seen us starting to see us return to our levels of play and creativity.

“If you look at the winless run it should already be over. Today it was just keeping the performance level up.”