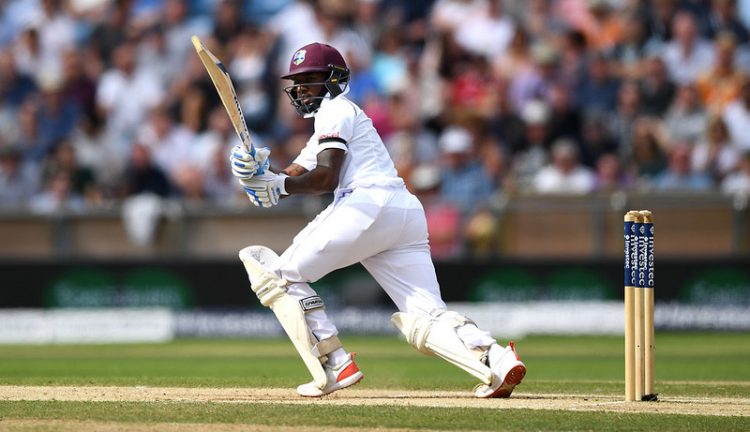 A combination of some resilient batting from the West Indies and mistakes by the tourists is seeing the second Test heading for a draw but spin bowling coach Jeetan Patel is upbeat on England’s chances of forcing a victory (Draw 4/11, England 11/4, West Indies 14/1 – Match Betting).

England got themselves into a strong position with Joe Root and Ben Stokes both scoring centuries to allow them to declare on 507-9, before they dismissed John Campbell early in the Windies reply on day two.

Despite taking two wickets in the morning session on day three with Shamarh Brooks out for 39 and Nkrumah Bonner following quickly for 9, the hosts dug in with captain Kraigg Brathwaite and Jermaine Blackwood (pictured) sharing a stand of 173, resisting England for nearly 68 overs, that almost took their side to the close of play.

Ultimately though they fell short with Blackwood succumbing to the part-time spin of Dan Lawrence late on as the West Indies finished the day at 288-4, trailing England by 219 runs with two days of play remaining.

Brathwaite (10/11 to score over 139.5 runs) is still at the crease on 109, having faced 337 balls, and will be looking to bat his side to safety, while England will be regretting not taking one of the few chances they created as their bowlers again struggled to make an impact.

Blackwood could have been out for nought had England reviewed a Ben Stokes LBW appeal that was going on to hit leg stump, while Saqib Mahmood’s celebrations of a first Test wicket when he yorked the same batsman on 65 were cut short as he had overstepped.

England’s attack in truth looked tame and even though Jack Leach was able to get some turn and bounce he didn’t bowl enough deliveries in the right areas to create any pressure.

Despite still needing six wickets in this innings and a further 10 in the second, Patel is not yet resigned to the draw though.

“We did a lot of good stuff and hopefully we come back with the same attitude and effort,” Patel said.

“I still think there’s a chance, everyone saw it was moving around at times out there.

“There a bit of up and down bounce, a bit of spin, a bit of reverse – I think there’s a huge opportunity to take this game forward. I wouldn’t say it’s spinning anymore, but it is drying on top.”