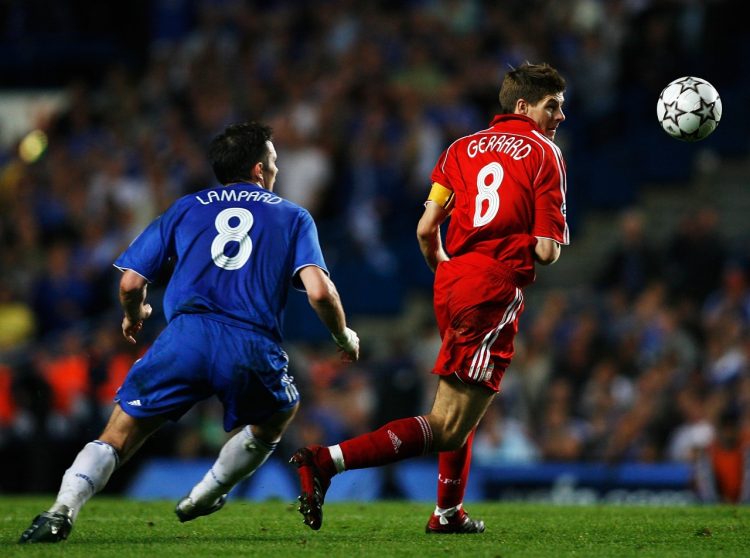 When compiling a list of the greatest central midfielders to play in the Premier League, we have to consider that ‘central midfielders’, in the traditional sense, are mostly things of the past. Archaic fossils we look back on with nostalgia.

‘They don’t make them like that anymore;’ you’ll have surely heard in grounds and boozers up and down the country. Your dad has probably told you about how good Bryan Robson was, your grandad regaled you with tales of Bobby Charlton.

Luckily football started in 1992 and the 90’s were still filled with your ‘box-to-box’ types, no specific roles were to be fulfilled, you were expected to do it all.

Of course, this is a gross oversimplification, but the role of a midfielder has been divided, redefined and refined as the years have ticked by.

In this list, we feature both old and new, and surely there’s something for everyone.

Ground rules. Premier League era only – while the rest of our criteria is a mix of ability, stats, trophies, longevity and intangibles such as ‘impact,’ and ‘legacy’.

We’re going to exclude midfielders who spent most of their tenure in English football playing in mostly advanced positions, such as David Silva, who would have made it otherwise, but is reduced to an honourable mention.

Strap yourselves in – you might be about to get angry, sad, happy, or all of the above at our choices.

Ok, so your dad was right, they really don’t make them like Roy Keane anymore. The ultimate all-rounder – defending, attacking, a leader. A colossus in that Manchester United midfield.

Ask Roy himself, he’ll tell you he wasn’t top 50, but he’s being modest. He was the best, he could single-handedly drag his team to a result, and did so on countless occasions.

Many falsely remember him as a ‘defensive midfielder’ but he was much, much more. He could do it all, and that’s why he’s number 1.

Let’s get it out of the way. No, he never won a Premier League title, but to deny the impact Gerrard had on several different versions of Liverpool teams competing for trophies would be grossly unfair.

‘Stevie G’ was a true ‘Roy of the Rovers’ midfielder. Contributing crucial goals at crucial times, he pulled his teammates from the fire on multiple occasions, looking like a force of nature in the process.

Some may argue he showed his best form when played in a more advanced role behind Fernando Torres, but Gerrard could do absolutely everything you could ever want from a midfielder.

The age-old debate of Gerrard or Lampard continues to rumble on to this day in the hearts and minds of everyone but the youngest of fans. We’ve gone with Gerrard, but the Londoner is very close behind.

One thing Frank had was a stunning goalscoring record from midfield. Arriving late in the box during attacks with clockwork-like precision, he was always in the right place at the right time to score some important goals for, at times, dominant Chelsea teams.

In the universe of midfield debates, before Gerrard or Lampard, there was Roy Keane v Patrick Vieira. Some hark back to those days as the finest English football has seen, the very peak of new-age quality mixed with old-school toughness, and they’re not wrong.

Very few rivalries had the impact of Man Utd v Arsenal, and along with Thierry Henry, Vieira was the face of Arsene Wenger’s side. Beyond that, he was simply a world-class midfielder who could execute pretty much every facet of the game, all the while with a rangy-elegance that made him iconic in the north London club’s midfield.

Paul Scholes occupies a strange place in football discourse. Overrated by some, vastly underrated by others. We prefer to think he’s somewhere in the middle, but leaning towards being the mythical figure some build him up to be.

Yes, some of the famous quotes are fake, but a lot aren’t. He’s seen by his peers, such as Xavi and Xabi Alonso, as the standard for midfield control, with them arguing that if he were Spanish, he would have been a mainstay in the national side. England however saw it differently. Why, we’ll never truly know.

Much like the rest of this list, he is without doubt one of the greatest midfielders to ever grace a football field.

Kevin De Bruyne is one of two on this list that still plays in the Premier League, and perhaps the only one, it could be argued, who is still at the very peak of his powers.

It’s between himself and Paul Scholes for the best passer in the room, but crucially, De Bruyne is also an exceptional crosser of the ball. You let him operate in that right half-space at your peril.

Perhaps a late bloomer, the Belgian is now by general consensus the very best attacking-minded midfielder in the world.

By the end of his career, he may very well occupy the upper end of this list.

It’s almost sad that Yaya Toure has been reduced to memes and jokes about birthday cakes. On his day he was an unstoppable force, and absolutely crucial to the rise and establishment of the current Manchester City we see today.

The only negative point we can think of is that when he wasn’t ‘up for it’ he could sometimes let the game pass him by. But when he was, which was, despite what some remember, most of the time, there were very few midfielders at the time who could match him.

The unsung hero of Manchester City, Fernandinho went somewhat under the radar as he racked up five Premier League wins. What makes his time there all the more incredible, is that they signed him at 29, in 2013.

All throughout his thirties, Pep trusted the Brazilian to be the last line of defence as well as being the one to control the play.

‘What does he do?’ is a question that was regularly asked during Michael Carrick’s career, the answer to which is, he set the tempo, started the play, marshalled the space between the defence and midfield, and passed forward between the lines exceptionally.

Those in the England set-up clearly didn’t agree, as he only achieved 34 England caps, which frankly should be seen as a scandal. Another United midfielder admired by his peers across Europe, with those in Spain and Italy asking why he wasn’t a regular fixture in the national side.

Vastly underrated, Carrick is one of the greatest metronomic midfielders this country has ever seen.

The final name on our list is perhaps the ultimate ball-winning midfielder. Quiet, shy, modest, these are all terms used to describe the Frenchman who was part of Leicester’s fairytale Premier League win after signing from Ligue 2 Caen, before going on to be a key figure in Chelsea’s midfield.

But on the field he is a monster, a tireless worker and inescapable ball-wrangler who gave opposition players nightmares at the prospect of having to circumvent him on the pitch.