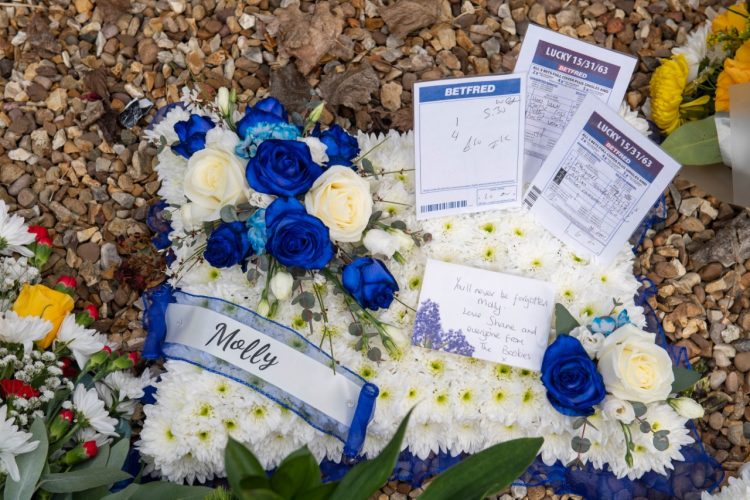 His family were determined that John Molloy (above) would have the most fitting of send-offs. They wanted the funeral of hod carrier king John, who quit hauling bricks to become a popular long-serving binman, to be a true reflection of his colourful life. And it was with that in mind that they arranged for his coffin to contain his snooker cue, some Betfred betting slips, his favourite paper the Daily Star ..… plus his comfy Del Boy slippers. There was standing room only at the Heart of England Crematorium in Nuneaton, where 200 mourners saw his coffin arrive draped in a Betfred flag – and hear exit music from his mobile phone ringtone, naturally The Gambler, by country and western star Kenny Rogers.

Grandfather of eight John, who died of a heart attack aged 64, worked all his life, latterly as the car park supervisor at the Coventry Building Society Arena, home of Coventry FC and the Wasps RU club.

But he always had time for his daily flutter at the Betfred shop at Riley Square, near his home in Almond Tree Avenue, Bell Green, Coventry.

John’s daughter Danielle said: “The bricklayers used to call him the best at his job in Coventry because he could keep three of them supplied with bricks; then he became a Coventry City Council binman for twenty years, before taking up his job at the Arena.

“Virtually every day he would be at Betfred, and was in the shop at tea-time, before his sudden death at home in the early hours. He’d often go for a Lucky 15, or doubles or trebles on the horses. He would study form, but sometimes pick a horse because the name reminded him of one of his grandchildren.

“He was never a big gambler, putting on £5 or less, with £10 being a big bet for my dad. He’s been a Betfred customer for more than 45 years and has had some big wins, although not life-changing amounts. One time he won he strapped the notes to his leg so my mum wouldn’t find out!”

Admin worker Danielle, aged 41, went on to say: “He was the life and soul of any party ..… a prankster who would love to get something from the joke shop to make the younger members of the family laugh.

“We have been amazed about the outpouring of grief. We knew he was popular but not that popular, and I would like to thank everyone who attended the crematorium, and the wake, at Bell Green Working Men’s Club.

“They helped us give him the best possible send-off ..… and one we know he’d have absolutely loved. We were all made up.” As well as being mischievous and rarely seen without a big smile, John’s pal, Betfred shop manager Shane Nagle, pictured above with deputy manager Kayleigh McGuire, revealed a different side to his character.

Shane said: “I’d say he was one our most loyal customers. He’d be in every day, even Christmas Eve, and as well as getting his bets on he was always asking about the staff’s wellbeing.

“He’d buy us a coffee when we were busy and when he won, give us a tip, or some chocolates. He was certainly one of our favourite customers.

“Just no one had a bad word to say about him. One regular only has one leg, and John, or Molly as some people called him, used to help him get his bet on, as well as make sure he had enough bread and milk and other groceries at home.”

Betfred boss Fred Done said: “It was a very unusual request to commission a Betfred flag but we were absolutely delighted to oblige John’s family. We are honoured that they considered Betfred such an important part of his life, and that our Riley Square shop in Coventry is an integral part of the community.” Fun-loving John as the Pope at a fancy dress party, with partner Angela. The dealin’ may be indeed be done, but what a hand he played. RIP.