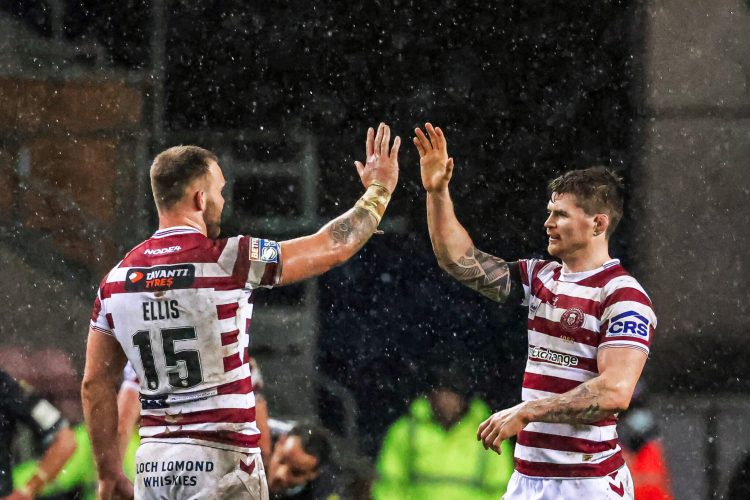 Wigan Warriors (Grand Final winners – 9/2) laid down a marker for the rest of the Super League season by securing a 22-12 win against Huddersfield Giants at the DW Stadium.

Matty Peet still has a 100 per cent record as head coach after his side scored four tries to defeat Ian Watson’s men, who have lost their own perfect record.

Liam Farrell’s brace helped them to the win, with Jake Bibby and John Bateman also crossing over.

The Warriors had to do it without Cade Cust for much of the game after the half-back was forced off with a concussion and Peet was pleased with the response of his side after the Australian departed the field.

“I was really impressed with how the players adapted when Cade went off,” he said. “Our leaders were outstanding. In times when we weren’t playing as slick as we have been, the commitment to each other was for all to see.”

Leeds were rocked early on with a serious-looking neck injury to Alex Mellor.

Blake Austin then crossed over on his home debut, but Catalans ultimately responded with tries from Fouad Yaha and Joe Chan either side of half time.

It increased the scrutiny on head coach Richard Agar, while Steve McNamara’s side secured back-to-back wins.

On Friday evening, defending Super League champions St Helens will look to maintain their own perfect record as they host Wakefield Trinity (Match betting – St Helens 1/22, Wakefield 11/1, tie 28/1), who are yet to pick up any points so far this season.

Tony Smith’s Robins have been beaten by Wigan and Huddersfield, while new Tigers coach Lee Radford saw his side lose to Salford Red Devils in round one, before Daryl Powell defeated his old club with new side Warrington wolves last week.