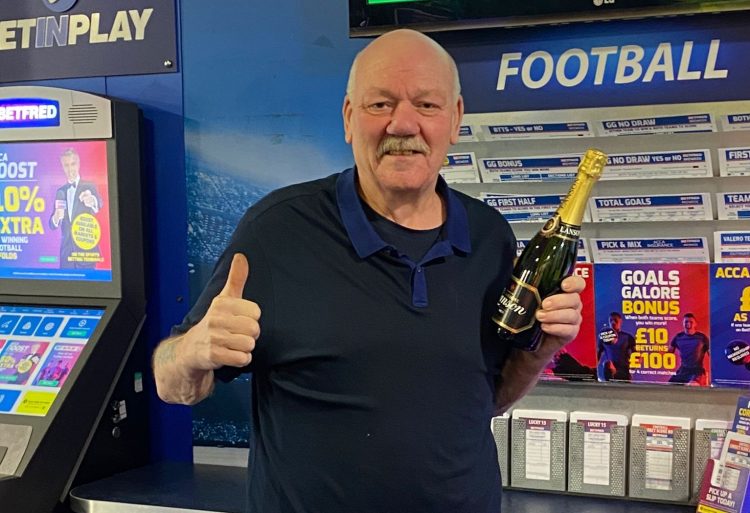 Greengrocer David Thorneywork knows his onions – but his football knowledge has also proved second to none after winning £99,138.52 at Betfred.

David went for Sheffield Wednesday and Shrewsbury to beat Cheltenham and Lincoln respectively in Division One – and he opted for Carlisle, Colchester, Exeter City, Leyton Orient and Northampton to topple Bristol Rovers, Tranmere, Stevenage, Barrow and Hartlepool in Division Two.

In the National League, he backed Grimsby to beat Dagenham & Redbridge and Torquay United to triumph over Weymouth.

The lucky punter was left sweating on the final game in his accumulator, with Wrexham were losing 5-4 to Dover until injury time – but the Welsh title chasers scored in the 91st and 98th minute to seal a dramatic 6-5 victory.

David, who wagered £200 at his local Betfred shop on Weoley Castle Road in Birmingham, said: “I was sweating on Wrexham because all my other teams had won and they were losing 5-2 at one point.

“It was the last result to come in, and I jumped out of my chair at home and started cheering as I watched the result come in on TV.”

The father-of-three, who is well known in the city as his greengrocer stall is outside of the Queen Elizabeth Hospital, took just 10 minutes to make his selections.

“I just went down the coupon and picked out the teams I fancied,” he added. “It took me just 10 minutes or less.

“What am I going to do with the money? Well, there’ll be plenty of my children knocking on the door that’s for sure!

“Everyone in my family will get a bit, and my wife and I love going on holiday to India so we’ll definitely be going back there by the end of the year – and I’ll be buying her a present too.

“I go to the Betfred shop twice a week to put football bets on, and it was an unusual weekend with no Premier League or Championship matches because of the international break,” said the Birmingham City supporter.

Betfred boss Fred Done said: “It’s brilliant that such a hard-working fella and Betfred regular has won so much. What an incredible achievement to get ten correct football results across three divisions.

“He must have been on tenterhooks, but Wrexham eventually pulled through. He should forget about India and go to Wales for his holidays!”