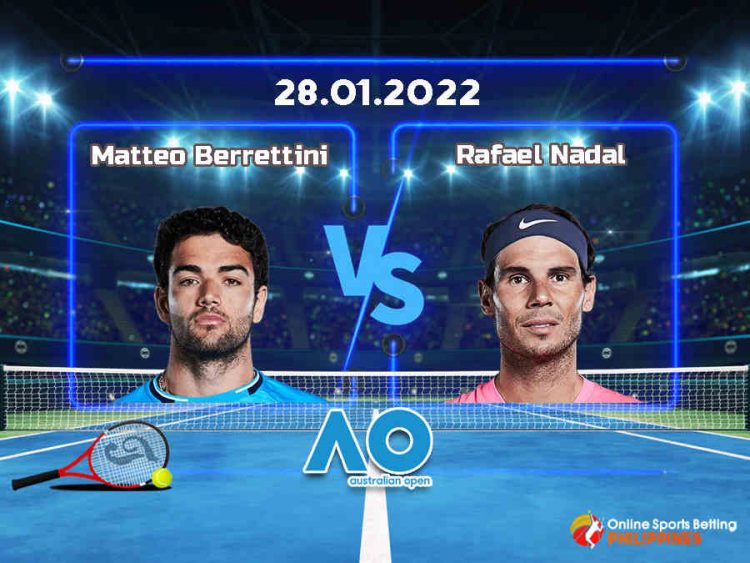 Matteo Berrettini and Rafael Nadal are the participants of the first Australian Open semifinals in the men’s competition. These two will share the court on Friday, and we expect to see a very interesting and exciting battle at Rod Laver Arena. The bookmakers see Nadal as the favorite, but anything is possible in these types of events. Be aware that even though Berrettini had less time to recover, he is far younger than the Spanish legend.

The Italian allowed Gael Monfils two sets in the quarterfinals, taking their match into the fifth set and making it much harder than it needed to be. The 25-year old had everything in his hands initially, quickly reaching a 2-0 lead in sets and looking as if he was going to roll over the French veteran. However, several mistakes, combined with a lack of focus, brought Berrettini into a very difficult situation, but he responded well in the fifth set, eventually winning.

The No.7 seed’s biggest weapon is the first serve, and his percentages are around 70%. We’ve seen that constant throughout the entire tournament.

He had a relatively tough path up to this point, eliminating Brandon Nakashima in the opening round, 3-1, Stefan Kozlov, 3-1, young Carlos Alcaraz, 3-2, and Pablo Carreno Busta, 3-0. Needless to say, that return and long rallies aren’t his specialties.

Rafa squeezed out a win against Shapovalov in the quarterfinals after one hell of a battle with the Canadian. Like Berrettini, he too had a big fall in the latter stage of the event, losing two sets in a row and playing the fifth one. Though, we need to say, and this is a fact, that the 20-time Grand Slam winner had a bit of protection from the chair umpire, who bent the rules allowing him to take longer a break between the sets. In the end, that disturbed Shapovalov, who completely lost his focus.

We’ve seen some traces of fatigue on Nadal’s face in this clash. That is understandable, having in mind that he has 35 years. But his explosiveness is still there, even though it isn’t as intense as before. One thing might be problematic for Rafa: a poor percentage of his first serve, which rarely goes beyond 65% in Australia this year.

Just to mention that he eliminated Marcos Giron, Yannick Hafmann, Karen Khachanov, and Adrian Mannarino so far. Khachanov was the only one who snapped a set from him during that stretch.

Berrettini vs Nadal Head to Head

Nadal is the favorite here, and he will likely win this contest. However, don’t think it would be very easy for one of the best players ever. Berrettini is dangerous, especially if his first serve works well, and we believe that he has the power to snap at least one set from Rafa. That is our safest bet for this matchup – Berrettini to defend a +2.5 sets handicap.